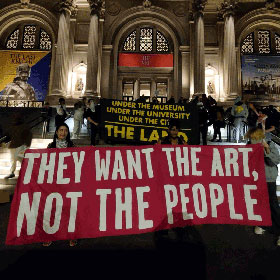 ‘The general population needs to think more about what the beauty of museums is built on,’ The Art Newspaper quoted one protester as saying during Decolonize This Place’s fourth annual demonstration on Columbus Day. The New York-based movement is ‘facilitated’ by MTL+ Collective, at the heart of which are Amin Husain and Nitasha Dhillon, and seeks to raise awareness of ‘Indigenous struggle, Black liberation, free Palestine, global wage workers and de-gentrification’. When it transpired that the vice chair of the Whitney’s board, Warren Kanders, was also CEO of a company that manufactured teargas used at the Mexican border, DTP led protests that generated acres of coverage, encouraged several artists to withdraw from the showpiece Whitney Biennial and led to Kanders’s resignation. It was a signature victory for a group that has become synonymous with campaigns for social justice in the artworld and their impact on institutional programmes, politics and perhaps even infrastructures.