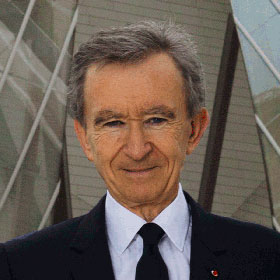 The ‘wolf in cashmere’ recently became the third richest person in the world. As chairman and CEO of luxury group LVMH, a little bit of his Bloomberg-estimated $97.3bn fortune goes to the Fondation Louis Vuitton in Paris. This year the private museum gave over its galleries to Gilbert & George, Jean-Michel Basquiat and the Courtauld’s hallowed collection of Impressionism. The foundation’s smaller ‘espaces’ in Venice and Tokyo, meanwhile, hosted shows by Philippe Parreno and Christian Boltanski respectively. Yet it was an even more spectacular brand of philanthropy that put Arnault and his family in the spotlight this year, after they publicly announced a €200m donation to Notre-Dame while the cathedral was still smouldering (conveniently overshadowing the €100m earlier pledged by his nemesis François Pinault). Sceptics suggested that Arnault would benefit from a tax break (he says not), and sniping over this and other megadonations was only partially quelled when, in September, they were eventually signed off.

The Art of Pain and Discomfort

Dispute is over minimum hourly pay

The designer, known for his signature heat-pressed pleating technique, saw clothing as ‘like beautiful architecture for the body’